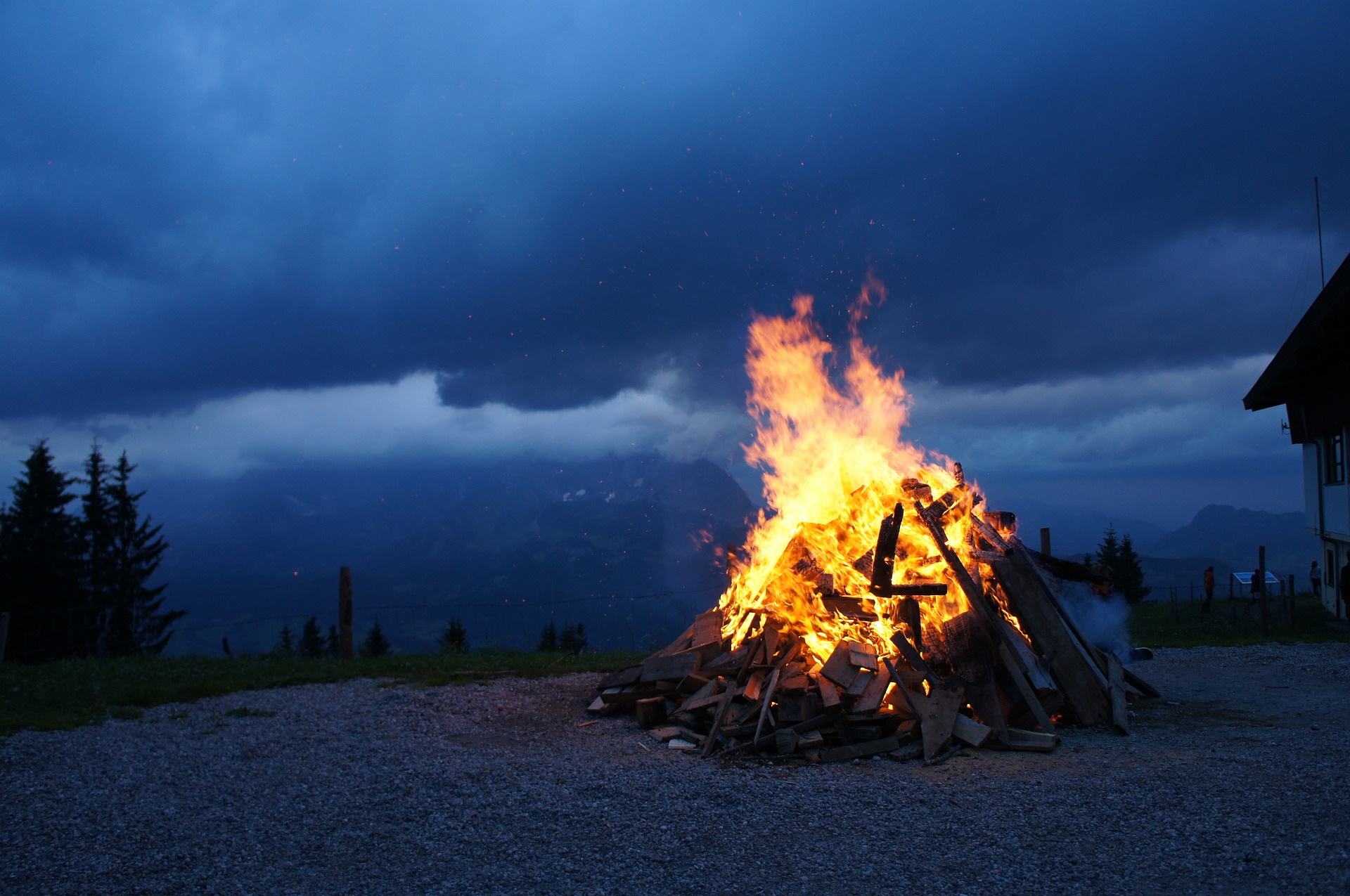 Are you allowed to hold or attend religious services in Ireland?
And why is the answer obscure?

Fire is sacred to Zoroastrians, who celebrated new year on 21 March, but is used in other religious faiths too. In many Christian traditions fires are lit for Easter, including to initiate the vigil. The early Irish celebrated the festival of Bealtaine with fires. All fires were to be extinguished until the druids lit the High King’s fire on the hill of Tara, it is said. And that in 433, St Patrick defied the law by lighting a competing Easter fire on the nearby hill of Slane.

Christians using the western calendar are now celebrating Easter. Passover has just ended. Ramadan starts next week. Community prayer in synagogues, mosques, and churches is an important part of religious practice at this time of year.

Is it forbidden in Ireland, like in the time of Patrick?

In place of  the High King Loegaire mac Néill, the Minister for Health is now the lawmaker on this, making regulations under section 31A of the Public Health Act 1947 (which was added by section 10 of the Health (Preservation and Protection and other Emergency Measures in the Public Interest) Act 2020). The relevant law now is the Health Act 1947 (Section 31A – Temporary Restrictions) (Covid-19) (No. 10) Regulations 2020, as amended.

Regulation 8(1) prohibits (with exceptions) organising events for social, recreational, exercise, cultural, entertainment, or community reasons. It can confidently be said that this doesn’t cover religious services because (a) elsewhere the regulations refer to ‘worship or services’, and (b) such a reading would probably be inconsistent with the respect accorded by the Constitution to religion and ‘public worship’ (article 44.1, not to mention the preamble) and the guarantee of ‘free profession and practice’ of religion subject to public order and morality’ (article 44.2.1°).

What about attending services?

(i) lead worship or services remotely through the use of information and communications technology,

(ii) minister to the sick, or

Also, regulation 4(2)(l) provides that attending a wedding or a funeral is a reasonable excuse to leave home — although there are restrictions on how many may attend funerals (10, as we saw) and weddings (6 guests: regulation 9). Of course weddings and funerals can be religious or not.

Does all this mean that attending services is not a reasonable excuse to leave home? Or leading services that aren’t conducted remotely through technology, and aren’t funeral or wedding services? Is regulation 4(2)(o) (quoted above) the exception that proves the rule — the rule against leaving home to attend religious services.

strongly implied that it would have been a criminal offence to leave one’s home to attend any other form of religious service, although the principle that criminal liability must be clear may count against such an interpretation.

But the report goes on to note that there is no prohibition on holding religious services.

This would lend support for the view that it would be a reasonable excuse to leave one’s home to attend Mass, given that Mass is not criminally prohibited.

More recently, two of the authors have been less equivocal, concluding that there is no prohibition on attending or organising religious services.
In her introduction to the report, IHREC Chief Commissioner Sinéad Gibney wrote that the Commission shared the authors’ concerns, including about —

The blurring of the boundary between legal requirements and public health guidance – something which is fundamentally out of step with the principle of the rule of law.

This is an important point. As Hardiman J said in Cagney v DPP:

From a legal and constitutional point of view, it is a fundamental value that a citizen should know, or at least be able to find out, with some considerable measure of certainty, what precisely is prohibited and what is lawful.

But the Government has been vague. One of the authors of the report, Professor Oran Doyle of Trinity, called the Department of Health’s statement that religious services are ‘required’ to move online, which can only be understood as advice, a masterpiece of misdirection.

If the regulations do prohibit attending religious services, do they offend the constitutional guarantee of free practice of religion?

Eoin Daly of NUI Galway says the Irish courts would use ‘generic principles of proportionality, but with a relatively intense or strict standard of review.’  He thinks that the Irish courts wouldn’t get much help from US Supreme Court decisions that use a discrimination analysis, such as South Bay United Pentecostal Church v Newsome (which restrained enforcement of California’s ban on indoor religious services because they allowed other activities such as retail). But this was part of a proportionality analysis, under which restrictions on religious practice that don’t apply to other activities are subjected to a higher standard of scrutiny.  If the effect of Ireland’s regulations is to prohibit attendance at religious services when other activities are allowed, and the distinction cannot be justified, that should bear on whether the prohibition can be justified as proportional.
A number of courts have run the proportionality ruler over  public health restrictions on religious practice. Last year the German Federal Constitutional Court restrained enforcement of a closure of mosques, churches, and synagogues, noting in particular the disproportionate effect on Friday prayer during Ramadan.
Last month, in Philip the Scottish Court of Session held that closure of places of worship was subject to a proportionality test, both under Scots constitutional law (the doctrine of the twa kingdoms, restricting the Scottish Parliament’s role in religion) and articles 9 and 11 of the European Convention on Human Rights, as implemented by the Human Rights Act 1998 and the Scotland Act 1998.
Lord Braid applied the 4-prong test of proportionality used by Lord Reed (dissenting) in Bank Mellat v HM Treasury:  importance of the objective, rational connection to it, no less intrusive means, and balancing the interests: contribution to achieving important objective outweighs severity of  impact on rights.
Lord Braid held that the restrictions fell at the third fence: the Scottish government had not shown that the objective could not have been achieved with less restrictive measures. Like the US Supreme Court, he said (at paragraph 114) that once the government allows some exceptions to the ‘stay at home’ rule, it has to justify why other exceptions are not allowed. It also failed on the fourth element, balancing: failed to show that the blanket closure of all places of worship would contribute to a material reduction in risk, and that it fully appreciated the importance of the rights in question.
The Irish government must also have been concerned that banning religious gatherings would be found disproportionate to suppressing the virus. For now, it seems to have brought about a ban using obscurity. At the rule of law’s expense.
This website uses cookies to gather statistics on how it is used. By clicking “OK, grand”, you consent to this. Read more
OK, grandNecessary cookies only
change cookie settings

This website uses cookies to improve your experience while you navigate through the website. Out of these, the cookies that are categorized as necessary are stored on your browser as they are essential for the working of basic functionalities of the website. We also use third-party cookies that help us analyze and understand how you use this website. These cookies will be stored in your browser only with your consent. You also have the option to opt-out of these cookies. But opting out of some of these cookies may affect your browsing experience.
Necessary Always Enabled

Performance cookies are used to understand and analyze the key performance indexes of the website which helps in delivering a better user experience for the visitors.

Analytical cookies are used to understand how visitors interact with the website. These cookies help provide information on metrics the number of visitors, bounce rate, traffic source, etc.

Other uncategorized cookies are those that are being analyzed and have not been classified into a category as yet.

SAVE & ACCEPT
Powered by